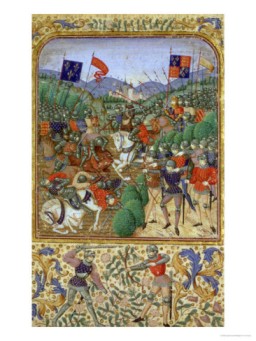 I’ve been indulging in a little bit of research while waiting for Science Fiction Fantasy Saturday to return in the new year. Well, I’ve also been writing, too! But Herald, which will someday get a better name, is going to take a bit of planning to get right in my mind. So that means research.

It’s the little things that catch my attention. Like a note that The Anjou King of Arms was annoyed at pursuivants abusing their diplomatic immunity by spying for their masters. And that the Duke of Burgundy was murdered by the Dauphin. And that Joan of Arc raised her army a mere 14 years after Agincourt. I mean, in the grand scheme, I knew most of these things, but the writer in me pointed these out to pay attention to.

I don’t know where I’ll go with them, since the world Denis inhabits is a bit different than our own (what with ghosts and heralds laying spirits to rest and magic and all), but the journey should be fun. Maybe not for Denis, but that’s the plight of the protagonist, eh?